“Addicted to God, Awaiting the end of days

With martyred flesh, Strewn across death beds of clay.

A bronze age myth, In the shadow of an eagle,

With snakes and tongues, and the war tempests rattle

Addicted to God, I hold the props of death.

Scythe, mist and skull, and cloak of hooded dread.

From the boiling rage of war, scowling pestilence awakens.

I’m the offspring of chaos, The croaking face of grim.

From eagle to cross. To absolve all from sin.

From Caesar to pope, on bended knees repent.

Addicted to God, My sacred words are hollow.

The slain care little, if they lead or follow.

In the bray of horns, crusaders keep the faith.

Addicted to God, Awaiting the end of days

With martyred flesh, Strewn across death beds of clay.

A bronze age myth, In the shadow of an eagle,

With snakes and tongues, and the war storms above.”

Rome– from whore to virgin

Rome, the most ruthless of empires depicted in the book of revelation as the great whore, to be the virgin church of the new Christian movement. This song is about the transition of the Roman Empire and the Holy Roman Empire, from the Eagle standards of its legions to the Cross bearing warriors of its defenders. The tile represents the imperial Eagle standards of Rome twisting into the holy crucifixes of the Holy Roman Empire.

Most Jews do not even acknowledge Jesus to be the Son of God.  Jesus is a Roman idea, created for a Roman audience by a new religious sect known as Christians.

The writings they circulated had to be appetizing for a Roman audience and that is why so much of the blame for the death of Jesus is placed upon the lap of the Jews.

Anti-Semitism even reared its ugly head here although maybe not many people would admit it. [More of this on the last track] ‘A canticle….]

That said, there is no smoke without fire, so it’s safe to say Jesus did indeed exist, but not in the exaggerated and deified form we are given to believe. The present religious system of Christianity that has its roots in Roman Catholicism is built on the teachings of Christ and more importantly the resurrection. It also draws much from collective works of both the Old and New testaments which form the Bible. A faith that is blind can accept the word of the Bible, but what of applying logic to religion? Logic and faith are like chalk and cheese. They share no similarities and run in opposite directions. Then there is historical fact which can confirm much of the Bible but still has little effect on whether Moses really did part the Red sea or that Christ came back from the dead.

Constantine was the son of Constantius I, Roman Emperor of the West (305-6), and Helena, a woman of obscure origins, whose fervent conversion to Christianity, and legendary: finding of the True Cross, won her sainthood. After defeating his rival Maxentius, son of an earlier emperor Maximian (286-305), at the Milvian Bridge in Rome. t312), Constantine established himself as the undisputed ruler of the Western Empire. The night before this battle, Constantine’s earliest biographer Eusbesius tells us, the emperor saw a cross of light in the heavens and the words In Hoc Signo Vinces (“by this sign you shall conquer”). His soldiers went into battle bearing the Christian monogram on their shields, rather than the Roman eagle, and a standard of Christ’s cross carried before them. From that time, as he won battle after battle and consolidated his rule over the empire in East and West (324), the Emperor claimed to be fighting in Jesus’ name, as the champion of the Christian faith.

Here we have Christian myth bolstering the Cross as a symbol of  Gods Love and redemption. During the first two centuries of Christianity, the cross may have been rare in Christian iconography, as it depicts a purposely painful and gruesome method of public execution. The Ichthys, or fish symbol, was used by early Christians. The Chi-Rho monogram, which was adopted by Constantine I in the fourth century as his banner), was another Early Christian symbol of wide use.

Under this symbol of peace the Roman Church obliterated the surrounding religious institutions, decimating paganism and all other forms of worship. This warlike spread of intolerance was a wrapped in the deceitful sermons the missionaries peaceful embrace of tolerance. The Christian banner was hoisted aloft the more advanced European nations in terms of technological skills and this was more apparent in the skills of war that enabled Christianity to conquer without good reason [other than the usual human need for greed and violence] certain parts of the  Americas and Africa. This is the mark of the Cross, a symbol of pain issuing pain to countless people throughout the ages. I am not appointing blame to Christianity here. This wholesale slaughter would have occurred anyway. But Christianity cannot ignore its role in the forming of the Western culture as we know it today, and beyond that the very world. Islam is a predictably warring faction that indoctrinates by the Sword, but no less than Christianity has done. It matters not how many good meaning people who genuinely wish to help the needy, cure the sick and home the homeless try to make a difference in this troublesome world. The leaders and corrupt systems that bind the great religions will always be politically or spiritually obliged to forfeit the essence of good for the more profitable essence of evil. It is that same old adage, Evil is power and strength, Good in its purest form is weak. You cannot fight guns with words, and when you pick up the gun you become what you are fighting. It’s the way we humans conduct our selves and this song tries to reflect that all encompassing madness. 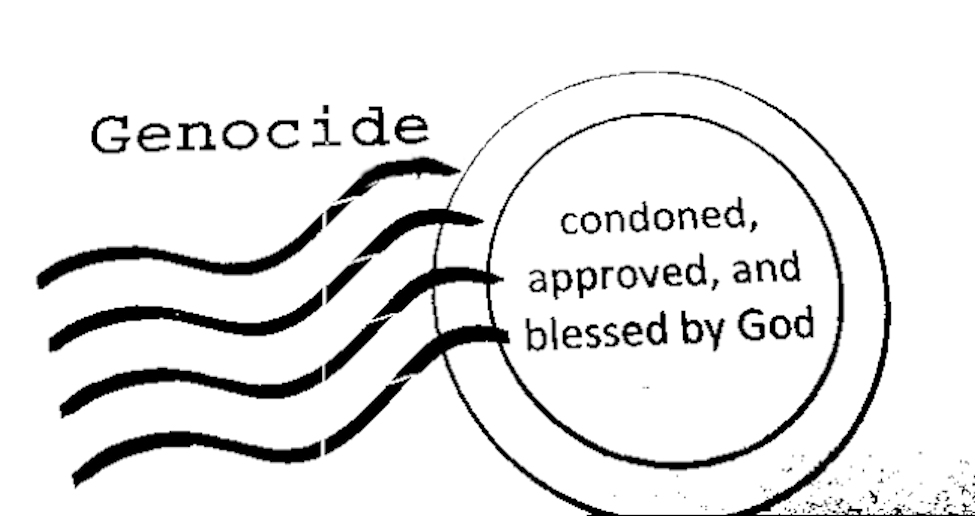